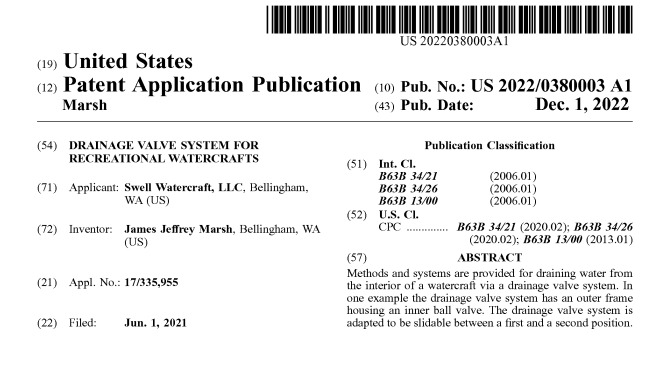 Swell Watercraft, LLC announced it has been awarded it’s first patent, US patent 0380003. It’s a utility patent that covers our Scupper Valves, which has an on/off position and utilizes a ball and paddle speed to drain kayak cockpits.

“We launched the company in 2016 with the idea drainage offers obvious market superiority. The kayak was easy to design, but the valves were a much more difficult process,” mentioned owner Jim Marsh. “They took 2.5 years and 6 different prototype versions to get it right. We had our doubts along the way, but we eventually got to the exact place we had envisioned. It was nerve wracking.”

Swell is busy setting up a state of the art production facility in central Iowa. Their kayaks have been imported into over 15 countries around the world. In 2022 they received the Best in Class designation as a sit on top kayak in their “Kayaks of the Year” awards.

About Swell Watercraft: Swell Watercraft makes small boats for your big dreams in Ellsworth, IA. It’s Scupper series of kayaks were designed to be the most advanced sit on top kayak ever built. They have been building lighter and better kayaks since 2016 thru advancing superior ideas and processes. For more details, go to swellwatercraft.com.